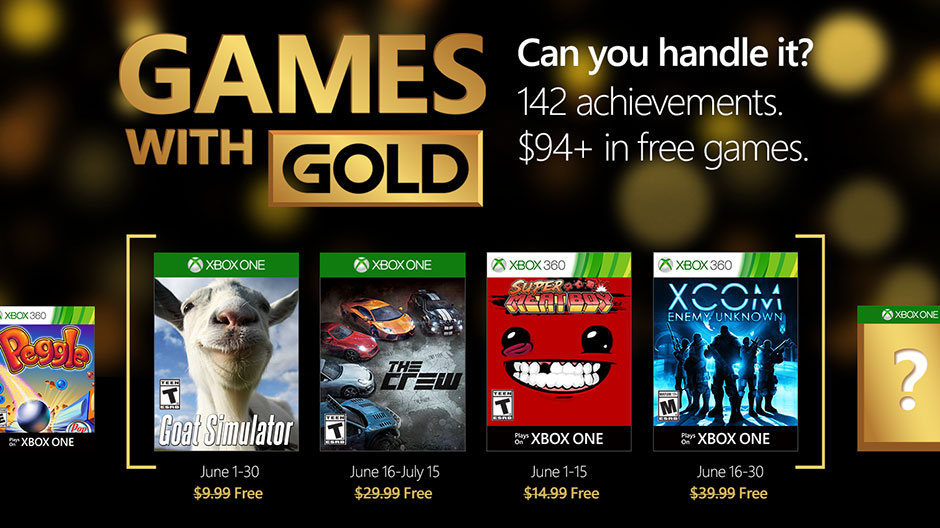 If you haven’t played XCOM, you will enjoy the hell out of it. But Goat Simulator was fantastic on PC. The Crew was… a game? Super Meat Boy is frustratingly good.  What does Microsoft have to say? The following:
As usual, all games are available only for a limited time, as part of the ongoing Games with Gold program, so sign up now to get in on the action!

On June 1, we’ve got the next-gen goat simulation technology of Goat Simulator! Crash through the world as a goat, do some epic tongue grabs and rack up points for destroying everything you see. You can even compete with your friends to see who can smash more things in style. Oh, did we mention you can be a goat?

Then, on June 16, take a wild ride with your friends in The Crew. A revolutionary, action-driving open-world game with a richly detailed recreation of the United States, The Crew offers an online driving experience like none other. Tackle challenges across the map, infiltrate underground racing teams and defeat dangerous criminal groups with Alex Taylor. There is no better time to take a test drive.

Also on June 1, put on your platforming shoes because Super Meat Boy is coming at you full force on both Xbox 360 and Xbox One. It has over 300 levels, epic boss fights and tons of unlockable secrets like retro warp zones. You can even play with characters from other famous indie games. So, there is only one question left to ask: Can you run, jump and wall jump through pure madness?

Last but certainly not least, get strategic and fight off aliens with XCOM: Enemy Unknown. Prepare your squad of custom-equipped troops with countless upgrades, abilities, and equipment, because XCOM: Enemy Unknown is the complete turn-based strategy package.

We’re excited to celebrate our birthday in June, and we’re even more excited to continually give away amazing free games to our Xbox Live Gold members. Check out the full details on our Games with Gold program, and make sure you get in on the action!
Read more at https://news.xbox.com/2016/05/24/june-games-with-gold/#ilb2tM1W3r53D5o5.99